If you grew up watching hockey in the sixties, you knew Eddie Shack. Eddie was a pure showman. Not flashy on the ice, not Bobby Hull material, he was a showman through and through.

Shack was born in Sudbury, Ontario, in 1937,[2] the son of Ukrainian immigrants.

He left his job as a butcher to try out with the Guelph Biltmores hockey club, knowing he could return to the trade if hockey did not pan out as a career.

Shack played junior hockey for the Guelph Biltmores[3] of the OHA for five seasons starting at the age of 15. He had his best season in 1956–57, when he led the league in assists[4] and starred in the Memorial Cup playoffs.

The New York Rangers signed Shack and assigned him to their AHL Providence Reds farm team for half a season. He made the NHL in the 1959 season and played two years for the Blueshirts. In 1960, he was to be traded with Bill Gadsby to the Detroit Red Wings for Red Kelly and Billy McNeill, but the transaction was cancelled when Kelly decided to retire rather than accept the trade.[5]

In November of the 1960 season, Shack was traded to the Toronto Maple Leafs, where he played five seasons on the left wing as a colourful, third-line agitator who was popular with the fans despite a lack of scoring prowess. Canadian sports writer Stephen Cole likened Shack’s playing to that of ‘a big puppy let loose in a wide field’.

During the 1966 season Shack broke out, scoring a career high 26 goals on a line with Ron Ellis and Bob Pulford. His popularity was such that a novelty song called Clear the Track, Here Comes Shack, written in his honour and performed by Douglas Rankine with The Secrets,[6] reached #1 on the Canadian pop charts and charted for nearly three months.

Shack was a member of the Maple Leafs’ last Stanley Cup-winning team in 1967, although his production fell significantly and he was traded in May of 1967 to the Boston Bruins for Murray Oliver and cash.[7] Playing on the right wing on a line with Derek Sanderson and Ed Westfall, Shack revived and scored 23 goals. 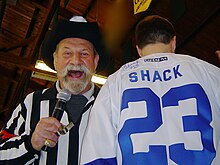 Eddie Shack (in referee uniform) hams it up at an NHL oldtimers charity event.

Afflicted by injuries, he spent the next four seasons moving between the Los Angeles Kings, the Buffalo Sabres and the Pittsburgh Penguins. Pittsburgh sold him back to Toronto for the 1974 season.[8] He retired after the 1975 season.

After retirement, Shack was a popular advertising spokesman in Canada, most notably for The Pop Shoppe soft drink brand,[9] and a Schick razor promotion for which he shaved his mustache. He also promoted a small chain of doughnut stores.[10] He appeared for a number of years at alumni all-star games. Shack also revealed he had been illiterate most of his life and subsequently became an advocate for literacy programs in his native Ontario.[11]